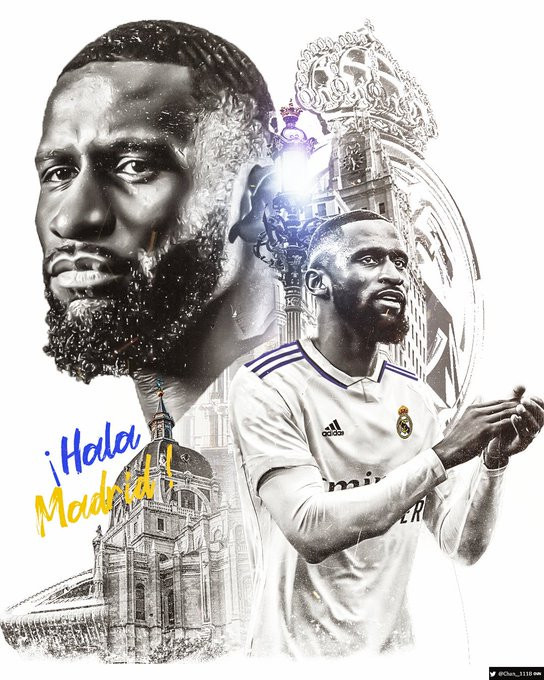 Real Madrid have confirmed the signing of Antonio Rudiger on a free transfer after the defender’s contract at Chelsea expired.

The 29-year-old German defender reportedly signed a four-year deal at the Bernabeu until the summer of 2026.  His contract with the LaLiga side will be worth in the region of £315,000-per-week.

He will also net a signing-on fee that will take his wage significantly high.

Sources close to the deal have also indicated that Rudiger’s release clause at Madrid will be €400m (£342m).

The German said: ‘I’m proud to announce that I’ll be joining Real Madrid. I’m super excited for all the challenges ahead and can’t wait to play my first games for this huge club.’

Rudiger will be presented as a Real Madrid player on Monday, June 20 at midday.

In five years at Stamford Bridge, the Germany international won the FA Cup, Europa League, UEFA Super Cup, and FIFA Club World Cup. He also won the Champions League last season having been brought back into the side by Thomas Tuchel following the sacking of Frank Lampard.

He joined the Blues from Roma for £29m in 2017 when the west London club were managed by Antonio Conte.

Happy new year to all our readers! Maybe this year be the best year ever.

In an exclusive interview with Adesua Oni, granted Bayo Speaks as a face of the week. She revealed her background, lifestyle, career and achievements. Adesua Oni is a Registered Nurse, The Founder of Pregnancy Support Foundation and CEO of Steppedup Global Consults....

Five turns around the earth ago, I fell into the abyss. There was no light and nothing to grab unto  Days became years, minutes became generations. No sun. No moon. Just sinking. Just falling. Until breathing halted. Somewhere Underground, somewhere underwater....

Motivation – Meant For You

The people who are meant to be in your life will find their way back to you. They have to… Because the laws of nature have decided that maybe this time was not yours, maybe thismoment was not meant for love but for something else. Maybe this stages of both of your...

In an exclusive interview with Vivian Daniel, granted Bayo Speaks as a face of the week. She revealed her background, lifestyle, career and achievements. Vivian Daniel is a Media Practitioner, Public Relation professional, Voice-over artist (in English and Igbo), and...

Declare to yourself some positive affirmations and see it manifesting. I am constantly growing and upgrading myself. I ambecoming more conscious, understanding and self awareeach day. I must become that which I say I am. Therefore, I boldlydeclare I am Rich! I see it...

In an exclusive interview with Martha Akintelu, granted Bayo Speaks as a face of the week. She revealed her background, lifestyle, career and achievements. Martha Akintelu is a People and Change Consultant. She has penchant for people and her career choice in the...