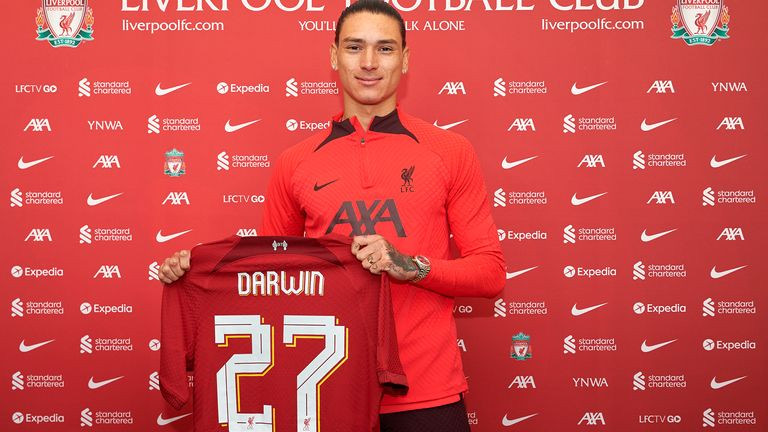 Liverpool have announced the signing of striker Darwin Nunez from Benfica in a deal worth up to €100 million that would break their transfer record.

Benfica confirmed on Monday that an initial fee of €75m ($78.59m) had been agreed with Liverpool, with €25m in potential add-ons for the 22-year-old Uruguayan international.

The deal is subject to a work permit and international clearance. Darwin will wear the No 27 shirt at Anfield, after signing a six-year deal on £140,000-a-week at Anfield.

‘I’m really happy and delighted to be here at Liverpool. It’s a massive club,’ Nunez told the club’s official website.

‘I’d like to thank my partner and my parents and my son, who is a real source of pride for me. They’ve been really important to me in the stages in my career. I’m really proud of them, and for the work we do, me and my partner, as a team and I’m grateful to her that I’m here.

‘It’s a pleasure to be here in Liverpool and I’m very happy to be a part of this great club.

‘I’ve played against Liverpool and I’ve seen them in lots of games in the Champions League, and it’s my style of play. There are some great players here and I think it’s going to suit my style of play here.

‘As I say, I’ve watched quite a lot and it’s a very big club and I hope I can give everything that I’ve got in order to help the team.’

He added: ‘When I arrived at the training ground, I was really surprised to see the set-up and the structure and all the trophies here.

‘You can then imagine yourself winning more trophies and then later on when you come here again and see the trophies on display, you can say, “Look, I was a part of that, I was there at that time, winning trophies”.

‘That’s one of the reasons why I came here to Liverpool – to win trophies and titles. I want to win a lot of trophies at Liverpool.’

Nunez scored 34 times for Benfica in all competitions last season, including goals in both legs of the club’s Champions League quarter-final defeat to Liverpool in April.